[Doctor Who] What is in the Doctor's Confession Dial? 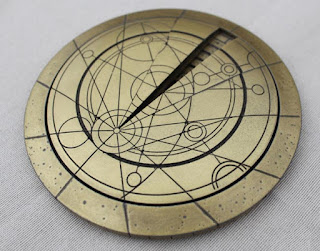 Steven Moffat is literally the cleverest man alive. However as evidenced by the internet he is also literally Satan. So what has our Satanic genius got in store for Doctor Who series 9?

As shown in the season opener, The Magician's Apprentice/The Witch's Familiar, the Doctor fears his own death, and so has created a 'Confession Dial' which when opened will reveal his greatest secret. A big fuss is made of it in these episodes, as he sends it to Missy (his best friend) rather than Clara, and makes a show of rescuing it from Davros.

More to the point - the Dial seems to be slowly opening! There are twelve segments, representing twelve episodes of the season (or perhaps twelve Doctors). What could be inside this dial though?
As always, the answer is in plain sight.

What has changed? The Doctor is constantly facing his impending and immutable death (see series 5 and series 6 and series 7), yet at no point did he whip out a Confession Dial to confess his darkest secret to the Ponds or Hitler or whoever. He didn't stop to make a Dial before leaping into the Pandorica or getting shot by the space astronaut or going to Trenzalore, even though all of these were supposed to kill him forever.

So whatever the Dial contains, it must have happened during the Capaldi era.

The one thing that has changed since Capaldi's eyebrows burst onto the scene is the discovery of missing episodes, namely The Web of Fear and Enemy of the World, revealed to the public in October 2013. However, episode finder Philip Morris recently revealed that all of Web of Fear was initially found, with episode 3 being stolen from the Nigerian television station shortly afterwards.

What has the Doctor got to suddenly feel guilty about? Why, the now-public revelation that Web 3 exists but was stolen. The timing of this can hardly be a coincidence, especially as the Doctor has previously gone to such trouble to hide personal secrets from the Great Intelligence (the villain in Web).

It is clear that having been rumbled and wanting to do the right thing, the Doctor has decided to return the copy of Web 3 that he stole, but after his death so he can't be blamed. He has placed it in a film can that he has called a Confession Dial and entrusted it to the Master, who as a fellow Time Lord is well aware of the historical value and public interest inherent in such films (likewise Clara, as a modern vapid television viewer, is completely unsuitable as she would probably just throw the film away because it's in black and white and doesn't feature David Tennant).

Obviously Doctor Who didn't steal the film in real life. But that means someone close to the production team must have. Philip Morris states that the fact Web of Fear was found got leaked and that was how it was stolen - and Moffat had written The Snowmen in 2012, long before the revelation that Web was found. How did he know to include the Great Intelligence unless he himself had visited a television station in Nigeria? And Moffat's name is similar to Little Miss Moffat, who had such trouble with a web-spinning spider. This can't be a coincidence!

For legal reasons I am not accusing Moffat of stealing Web 3. He is a lovely man with velcro-soft hair and has never stolen anything apart from the hearts of the British public. Perhaps it was someone else on the production team - we may never know. All we know for a fact is that Web 3 currently sits inside the Confession Dial.

But I beg Moffat that however he came by Web 3, to have the series finale be the Doctor returning it to the Restoration Team so that it can be properly cared for. The last thing anyone wants is for the Dial to open only for Peter Capaldi to remove the film and devour it live on air, despite the enormous ratings that would no doubt bring.
Posted by Tinfoil Fan Theories at 07:35