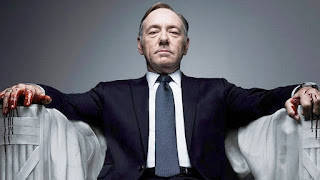 Frank Underwood is delusional and is locked in a mental hospital. He is occasionally moved but is sent back to the hospital. Claire is also a patient that eventually recovers. Frank's psychosis gets worse as the series progresses, starting with his initial incarceration in season 1 and progressing to a worse (and now famous) state by the end of season 3. In season 1 Frank, after being locked away, attempts a break out with Zoe and others but this fails.

Posted by Tinfoil Fan Theories at 01:20