[Game of Thrones] Stannis will still win 'Father Of The Year' 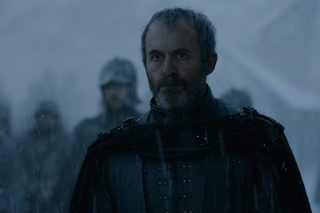 The most recent episode of Game of Thrones has put a spanner in the works of Stannis' plan to win Father of the Year as after many scenes of showing how much he loves his daughter, he makes the rookie error of burning her alive. Is everything as it seems though? After all, this makes no sense given everything we know about the Mannis - could this in fact be foreshadowing for an even more complex plan?

Burning his only heir to death has the bonus of unsettling his enemies. Roose Bolton, watching from the towers of Winterfell must assume Stannis is crazy and is trying to defeat himself. Rather than mobilising its full force, the Bolton army would hold back as they wait for Stannis to inevitably kill his own men. Perhaps they think if they wait long enough, crazy Mr Stannis will burn himself to death in the hope it will give him victory.

In fact, Stannis will most probably use this pyre as a NIGHT LAMP. The Boltons will be obsessed with this burning pyre that crazy Stannis used to burn his daughter. All Stannis needs to do is move the pyre over a big pit full of spikes and acid and dogs and relight it. When the Boltons attack in the middle of the night, they will run towards the pyre and fall into the pit, handing Stannis victory. Stannis is, after all, the foremost Westeros military commander.

But does this mean Shireen is dead? Was she sacrificed for victory?

Of course not! She is Stannis' only heir - if she is dead then his entire quest for the Iron Throne is meaningless. And would Stannis really burn his only child to death for a chance of defeating a shirtless Ramsay Bolton? Far more likely is the idea that she is still alive - but how? There are several tantalising possibilities:

In conclusion, whilst everything looks dark for Stannis winning Father of the Year, as we can see he might indeed be working to snatch a surprise victory!
Posted by Tinfoil Fan Theories at 10:07

Email ThisBlogThis!Share to TwitterShare to FacebookShare to Pinterest
Labels: Game of Thrones, Stannis