[Mario] Mario is a crazed murderer 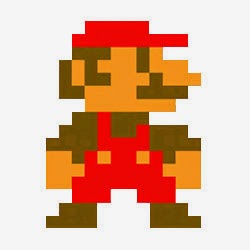 In this day and age, it is perhaps too easy to reinterpret the actions of famed Italian plumber Mario Mario and his adventures in the Mushroom Kingdom. Historians no longer have any sympathy for foreign troops invading a sovereign land in the name of 'freedom'.

Yes, Mario rampages against helpless Goombas, but his crimes go far deeper than that. His murderous rampage is against the innocent inhabitants of the Mushroom Kingdom themselves!

You see, when King Koopa invades the Mushroom Kingdom (we do not know the historical context for this annexation, so it would be unfair to condemn him based simply on this action) he uses his magic powers to turn the people into blocks.

"Wait!" You said. "That's stupid! You can't just make something like that up, use real facts and..."

...Yeah. It's canon. The people of the Mushroom Kingdom are the blocks that Mario runs over. Mario's quest sees him smashing every block he sees, awarding himself points for every transformed person he turns to dust like a twisted madman.

Sometimes when Mario hits a block he frees a mushroom... which he instantly consumes in a mad lust. The indiscriminate killing of Koopa's troopers is one thing, but his disregard for civilian casualties is nothing short of a war crime.

Super Mario Bros 2 gives us a glimpse into Mario's mind, as the entire adventure is a dream. We see that even in his sleeping moments he is obsessed with killing and destruction.

Of course, later evidence has come to light showing that Mario spent much of his free time playing party games and going karting with Koopa, casting serious questions as to how allied the two really were in the total destruction of the Mushroom Kingdom.