[Battlestar Galactica] Everyone who isn't a Cylon is a robot 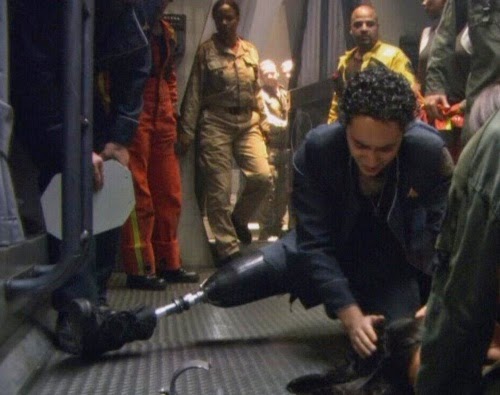 Battlestar Galactica is about a race of robots. And Cylons.

The events of Battlestar Galactica constantly repeat. "All of this has happened before, and all of it will happen again." Mankind creates Cylons. Cylons destroy mankind. New Cylons are created. They rise up against their creators. Again and again the same events happen.

But this means that every time history repeats, the Cylons become what is known as 'mankind' and create new Cylons. And what are Cylons? They are machines. Organic machines.

The thing is that we make many assumptions about background details in Battlestar Galactica. Many objects are described with unfamiliar words. "Ambrosia" is the word used for alcohol, for example. "Frak" is a word used for... a swear word. How do we know that familiar words mean familiar things? Like "heart" and "blood".


The fact that so many human characters treat the equally organic Cylons with such hatred and distrust and conviction that they are 'machines' speaks to the idea that there is something more fundamentally different. To a machine, something organic would be terrifying and 'other'. We assume that the humans are human as we bring with us our own preconceptions. But Battlestar Galactica is a show about shattering these preconceptions.