[Avengers] Why can only certain characters lift Thor's hammer? 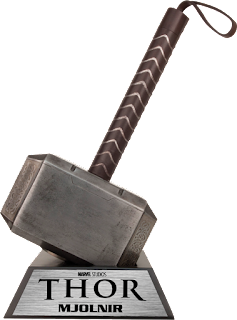 Avengers 2 is a perfect film about which no-one has any criticism. Joss Whedon was even forced to leave Twitter as he could not handle the deluge of praise from completely unentitled fans.

That said, there is one mystery in Age of Ultron that is still unsolved - just how could the Vision pick up Thor's hammer? (Spoilers for Age of Ultron, by the way). Thor's hammer Mjolnir is an ancient artifact full of awesome power, and only one worthy may hold it and thus gain the power of Thor. Whilst the Marvel universe is full of heroes, it turns out that most of them just aren't worthy enough to be able to lift it, with only Thor as the epitome of worthiness.

Unless of course, Thor is lying.

All we know about Mjolnir is what Thor himself tells us. Of course he would want to paint himself in the best possible light - only he can hold the hammer, thus the hammer proves he is worthy. How does the hammer calculate worthiness - how can (for example) a hero like Hawkeye not be worthy whilst Thor is? Some have said that it is Odin himself who decides who is worthy to hold the hammer, which is pretty convenient for Thor.

Does this make sense though? Odin had never even met the Vision, so he could hardly have judged him to be worthy enough to hold the hammer. Additionally, Thor himself isn't that worthy of a man: remember, he is a Viking god, and the Vikings were into pillage and rape with Thor held up as their highest inspiration, hardly candidature for worthiness.

No, something else is at play here; there is one connection between Thor and the Vision that everyone has missed:

Both characters have cloaks.

It seems hard to believe that the fact the only two cloak-wearing characters are also the only characters able to wield Mjolnir. Far more likely is that the hammer detects whether the user is wearing a cloak, and lets them pick it up. Both Iron Man and Hawkeye try to lift the hammer but fail because they are not wearing cloaks. Captain America is able to budge the hammer slightly because his costume is suitable superheroic, but lacks a cloak.

Loki is unable to wield the hammer - at first this seems like it breaks the theory, but instead it strengthens it. In the first Avengers film we see that Loki can change his clothes at will - clearly they are an illusion and the 'cloak' he wears doesn't even exist. Mjolnir can't be tricked by a fake cloaking device!
Posted by Tinfoil Fan Theories at 13:59