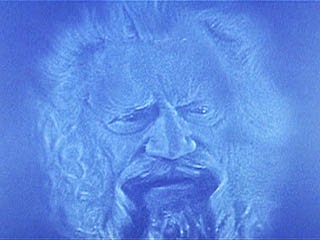 At the end of the film ‘Star Trek V: The Final Frontier’, Captain Kirk and crew finally reach the planet Sha Ka Ree at the centre of the galaxy and discover God… only it isn’t God, it’s an evil alien entity who Kirk must battle!

The assumption when watching the film is that the entity Kirk meets is not the real God. However, at no point does the entity admit that he isn’t God. Why would he lie, even when his ‘deception’ is uncovered? There’s actually no evidence that he isn’t God, and plenty that he is.

The actions of the God-entity fit that of the Biblical God, specifically the Old Testament God.

God in the film is the Old Testament God, who has been trapped on the planet (presumably since the year 0AD). Kirk and crew, who represent science and the loss of religion, find him… and kill him. It isn’t a film about a man who finds a fake alien God, it’s a film about a man who seeks out God with the intention of killing him. A very deep film from  writer/director William Shatner, and very underrated.