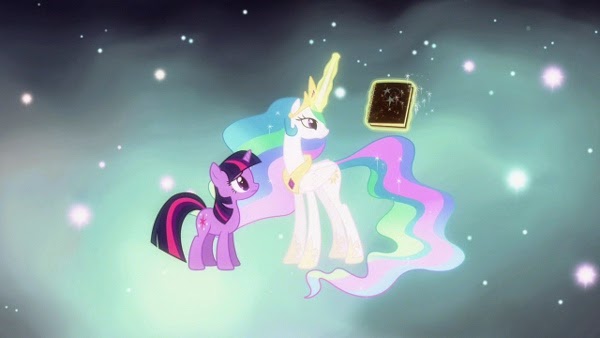 Twilight Sparkle is every right-thinking person's favourite pony princess. She is clever and brave and is best at friendship and friendship-knowledge. Her ascension at the end of season 3 was a highlight for many a fan, but was this event all it seems? It is in fact more likely that instead of becoming a princess, Twilight Sparkle died.

This may sound shocking, but the evidence is plain for all to see. For a start, Twilight Sparkle clearly dies on screen. In attempting to fix the Cutie Mark conundrum, she vapourises herself entirely, leaving only ashes behind. The imagery we see is afterlife imagery - Twilight can be seen ascending to heaven towards a bright light, and then meeting God (Celestia) in a white, heavenly realm to the sound of an angel's choir. Celestia then tells Twilight it is time for her to have her reward, a common metaphor for the afterlife.

Tellingly, at this point Twilight gains wings. Some have believed this to be part of a process in which she is made an 'alicorn', but Celestia has not shown great skill in genetic manipulation before and Twilight's previous deeds were surely more worthy of deification. No, more likely is that these are angel wings given to Twilight now she is deceased in a terrible magical accident.

Like an angel, Twilight can now fly and sit on clouds, as well as having increased magical power. It is unknown if she has also gained the ability to play the harp, though this is likely.

Does Twilight then return to Equestria? The evidence says no. Her friends are left behind to mourn her whilst Twilight begins to engage with her 'heavenly reward'. It is possible that Twilight does not realise that she is dead, having misunderstood Celestia's kind words. Perhaps Celestia should have been more brusque with her favourite pupil, but admonishing Twilight for carelessly atomising herself may have caused more upset to the little pony.

The idea that season 4 is set in some sort of afterlife for Twilight explains much. As an angel, Twilight is no longer able to harness the Elements of Harmony and so she explains this away in a fever-dream about magic trees. There are no more friendship reports, as Twilight's friends are too busy mourning her to learn new lessons about friendship. Tellingly, when Pinkie Pie's sister comes to visit, she looks nothing like the sisters we know exist. Twilight knows Pinkie Pie has a sister but not what she looks like, causing her to create her mental image of Pinkie's sister in the afterlife.

Is the fantastical battle with Tirek and subsequent growing of a magic tree-castle a sign that Twilight is able to reshape her world with more ease, or could it have been a result of the devil himself invading heaven and trying to attack one of Celestia's angels?

Whatever the case, it is clear that Twilight's 'ascension' was a one-way affair. Presumably the people of Ponyville will be much more careful with magic spells in the future, lest they end up like poor Twilight. And will Twilight ever find out her fate, or will she forever live in her carefully-imagined utopia?
Posted by Tinfoil Fan Theories at 01:00