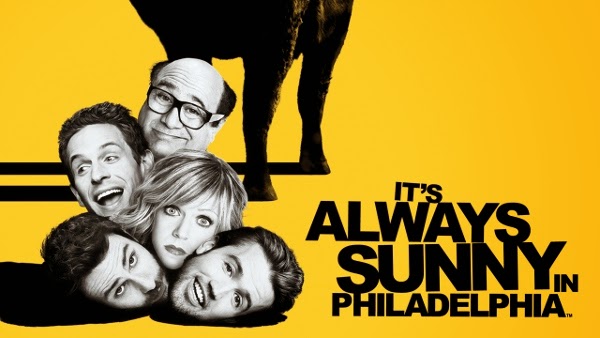 It's Always Sunny in Philadelphia is an hilarious show depicting the day to day lives of an average group of Philadephians. Some fans have picked up on subtle hints showing a darker undercurrent to events

Are the lives of Frank and Charlie and co really so happy? Or is 'Always Sunny' set in a terrible parallel universe where the Nazis won World War 2.

In the show the gang get up to all manner of scrapes. They commit arson, set people on fire, start fights and cripple people for life. They burgle houses, cause eye-gouging incidents and wrestling matches that end with life-altering injuries. They once filled a car with tanks of gasoline and crashed it, causing immense destruction. However, the gang's brush with the law are very low-key in comparison.

How could this be the case?

In this parallel universe, the Nazis won World War 2. Their evil is thus enshrined in law, and so committing terrible acts is actually pretty pardonable. For example, their kidnapping and terrorising of an immigrant family in 'The Gang Gets Extreme: Home Makeover Edition' received minor penalties for what was a massive crime. Were these penalties minor as the Nazi judge actually lauded their actions against foreigners?

This Nazi-led America is certainly more forgiving towards terrible crimes, as all Nazi states would be. Is there more evidence that this is the case though?

In the episode 'Pop-Pop: The Final Solution', Dennis and Dee discover their grandfather used to be a Nazi, and have fond childhood memories of attending Nazi rallies. Are we to believe their grandfather travelled all the way to Nazi Germany to become a Nazi? No, more realistically is the idea that he became a Nazi as the Nazis won World War 2, and so imported their ideology to conquered America. This also explains how a Nazi rally was an acceptable summer vacation for children.

In the episode 'The Gang Find a Dead Guy', Charlie is happy to casually dress in the uniform of a Nazi Officer, showing how such attire was perfectly socially acceptable as day to day wear.

Finally, the quest that Dennis, Charlie and Frank go through to find Hitler's dog painting shows that in this parallel universe, Hitler was remembered not as a villain but as a man whose paintings would be worth money. Clearly as history's greatest monster his work would not be valuable, but in a world where he won World War 2, collectors would be scrabbling for his paintings (as we see in this episode).

It's Always Sunny in Philadelphia shows itself to be a show far, far darker than the light-hearted comedy it initially appears. It remains to be seen what more twists in history will be uncovered in later seasons...
Posted by Tinfoil Fan Theories at 01:00